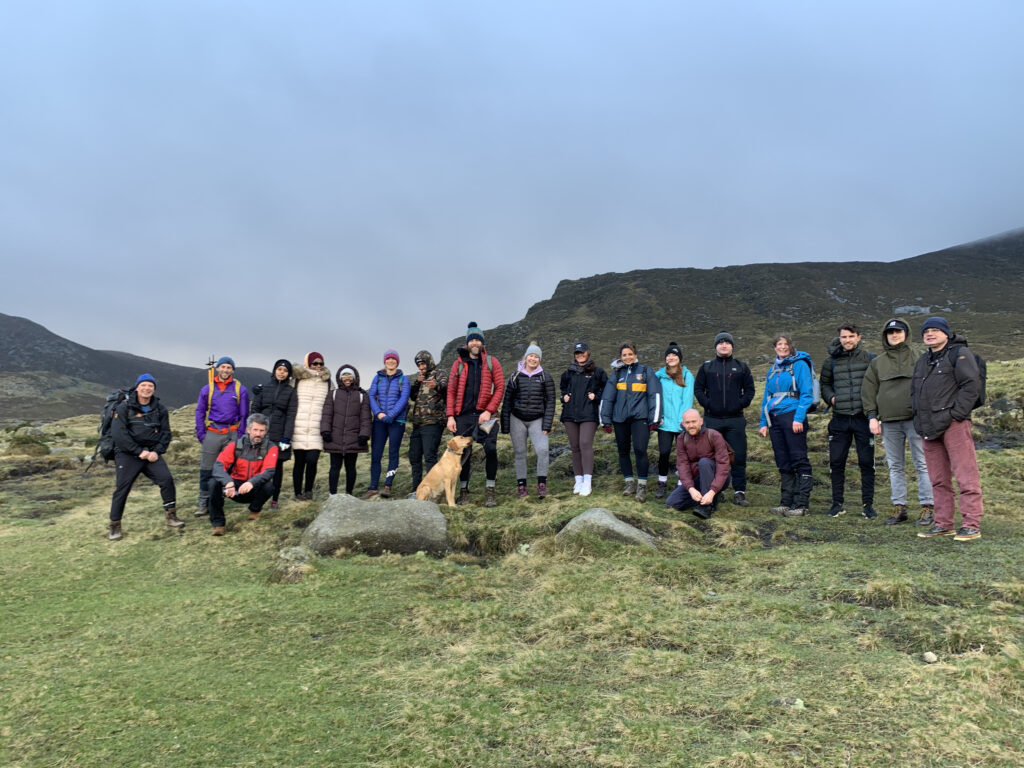 A group of intrepid McKees staff were joined by an equally plucky crew from Storehouse, our partner charity, on a day hike in the Mourne Mountains on the 11th November 2022. The combined team assembled at Meelmore Lodge at 09:45 for a briefing on the day ahead and the all important lunch collection. Although a few, who shall rename nameless, had brought lunch anyway the chance for a second one was not to be missed.

The walk started with a stroll along a path to reach the wall on the Mourne Way and a style that lead onto the open mountain. The weather, primarily the wind which was blowing 125 kph at 700m and 95 kph at 600m, meant the original plan had to change. So, after following the wall and negotiating a few stream crossings the Trassey Track was reached. During this leg everyone was encouraged to spend 5 minutes employing all 5 senses, rather than looking at phones or talking (you will have to ask them how they did ‘taste’).

From the sheep fold on the Trassey Track the walkers entered Tollymore Forest and followed a series of small trails and paths not known to many to reach a sheltered spot overlooking a bubbling river for coffee and a tray bake. Then followed a climb through more hidden paths in the forest to explore some glades and river ravines, the group being rewarded with the majestic autumn colours and even the appearance of a red quarrel to great everyone.

Lunch was had at the bottom of the ‘Mountain With No Name’ (yes that’s how it is known) prior to crossing the boundary wall, facing the wind and ascending this peak. It was now that the full force of the wind became apparent and although nowhere near what it was at height it was still easy to be blown off balance. Everyone agreed this was an exhilarating experience they were glad they achieved, plus the views over Newcastle were amazing.

It was then a relaxed dander back down through the forest to Meelmore Lodge for 15:00 (just as the rain drops started – perfect).

The day was led by Positive Steps Outdoors, a social enterprise born out of the vision that connecting people to the natural environment, and each other, helps individuals and teams manage life’s pressures.

Corporate Manslaughter – Is Your Business At Risk?

Corporate manslaughter – is your business at risk? One of...